What is the Flight Jacket?

Four miles south of Kitty Hawk on December 17, 1903, Wilbur and Orville Wright were probably too busy celebrating the success of the world’s first functional fixed-wing aircraft to realize the impact their invention would have on the way people dressed. The airplane, as it would come to be called, would prove to be devastatingly effective on the battlefield and become a crucial part of any modern mechanized war effort. But it was later, in the American armed services, that the now-essential piece of outerwear we call the flight jacket was invented. 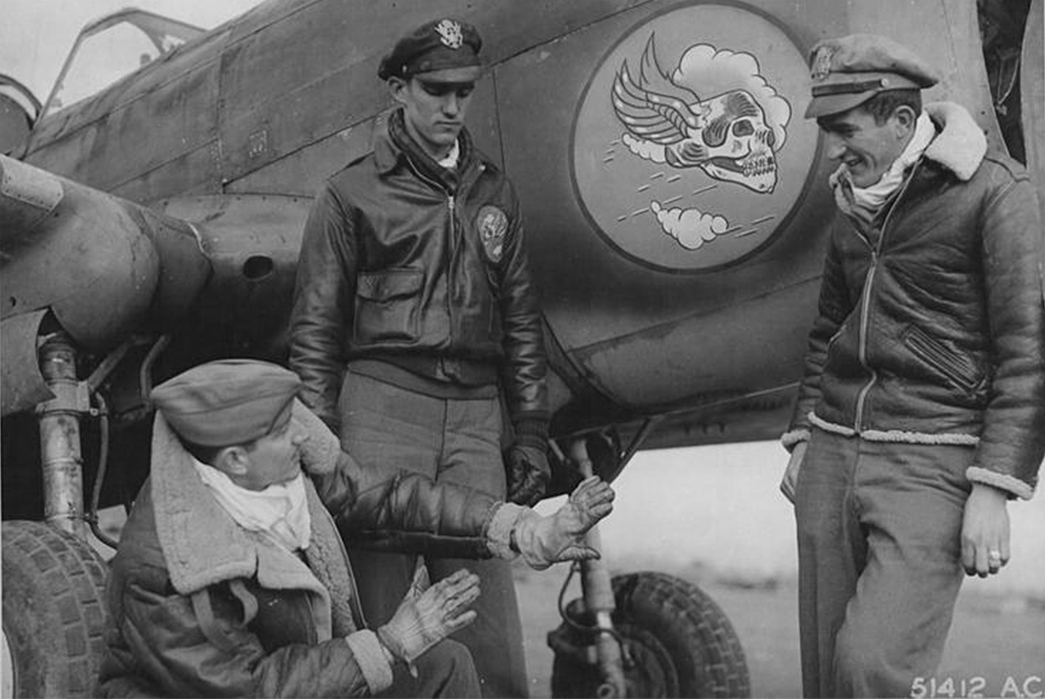 Even after the wars were over and the pilots went home, their jackets stayed important, becoming something of a phenomenon especially with those who hadn’t flown. It wasn’t just because these jackets were warm and fit well, but because there was something otherworldly iconic about the people who wore them as members of the newest and least-tested branch of the armed services. As technology advanced, sending pilots higher and faster into the unknown, their uniform changed, but this aura of idealized American ingenuity and military might remained.

The flight jacket is considered a must-have by millions of men.

As the American military began to expand into the unrivaled behemoth it is today, its know-how with outerwear grew apace. This article examines the first flying jackets produced by the U.S. military from the first standardized garment in 1927 through the beginning of the jet age in 1950.

The Aviation Section of the U.S. Signal Corps was the military branch that helped the American doughboys fight the Germans during World War I. But the first step toward the modern flight jacket was made until 1917 with the founding of the Aviation Clothing Board. The planes of the time had open cockpits, so it was absolutely essential that pilots be well-garbed for duty. All told, it was undoubtedly a wet, cold, and unpleasant business being a pilot in the early days of military flight.

The Aviation Section became the Army Air Service in 1918, which would in turn become the United States Army Air Corps in 1926. As planes improved, so too did the structure and bureaucracy of the military branch commanding them. Even the uniforms got better.

First produced in 1927 and decommissioned in 1931, the A-1 was a vital first step in the creation of the iconic flight jacket. Made by a number of contractors, details vary widely on these jackets, but most had several things in common.

The A-1 had a knit waistband and cuffs, which not only insulated the jacket from cold air, but gave it a particularly flattering fit, high on the waist. The A-1 also had flapped pockets near the waist, but the size and stitching of these are all over the place depending on the contractor or whether they were used by the Air Corps or Navy. The original jacket had seven buttons and a knit collar, details that did not live on in the following models. There is some disagreement about what leather was used for these jackets, but it seems that goatskin, sheepskin, and horsehide were all used at different times and by different contracted factories.

Although the A-1 is not nearly the most iconic of the jackets discussed here, its value cannot be underestimated. As planes became more complex and pilots more daring, the link was forged between the courageous pilot and his jacket. Above, Charles Lindbergh wears a well-worn A-1 style jacket before completing the first solo transatlantic flight in 1927. 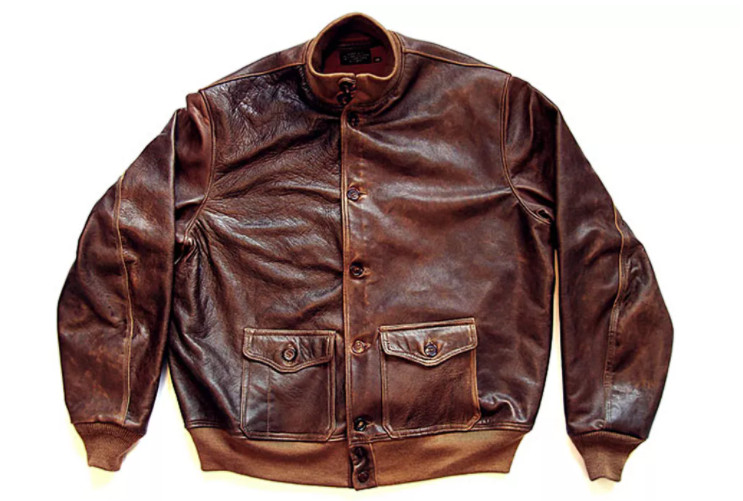 The A-2 Flight Jacket arrived on the scene in the early 1930s and became standard issue for the Air Corps. First made from a “seal brown” horsehide leather with a silk lining, quality of the jackets fell somewhat with wartime rationing and the transition to a goatskin leather with cotton lining.

Despite the technological advances made in the previous years of aviation, the A-2 was still optimized for an open-air cockpit and so featured heavy duty fasteners and again had the knit waist and cuffs. The zipper and the collar are the biggest differences from the A-1 and despite the fact that the cut is relatively similar, there is something more debonair about the A-2.

The A-2 was finally phased out in 1943, but the jacket worn by the Air Corps daredevils of World War II would become perhaps the best known of the ones on this list. They were so cool, in fact, that when Steve McQueen played Virgil Hilts in The Great Escape, he of course needed an A-2. 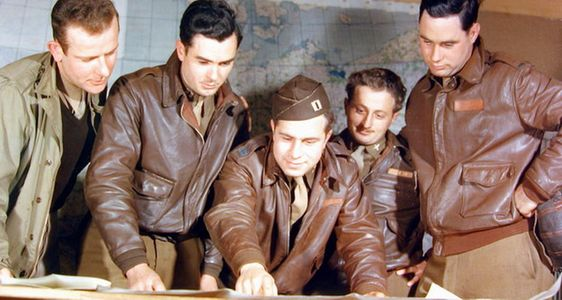 The navy wear A-2 flight jackets in the movie Top Gun.

The A-2 is undoubtedly the most famous of all existing designs, flight jacket of WWII.

We created the company A-2 Leather Flight Jacket, to make an exact replica flight jacket A-2 WWII era.

The May 29, 1931 began as regulation Army Air Corp intermediate flight jacket that was used until the end of the war. 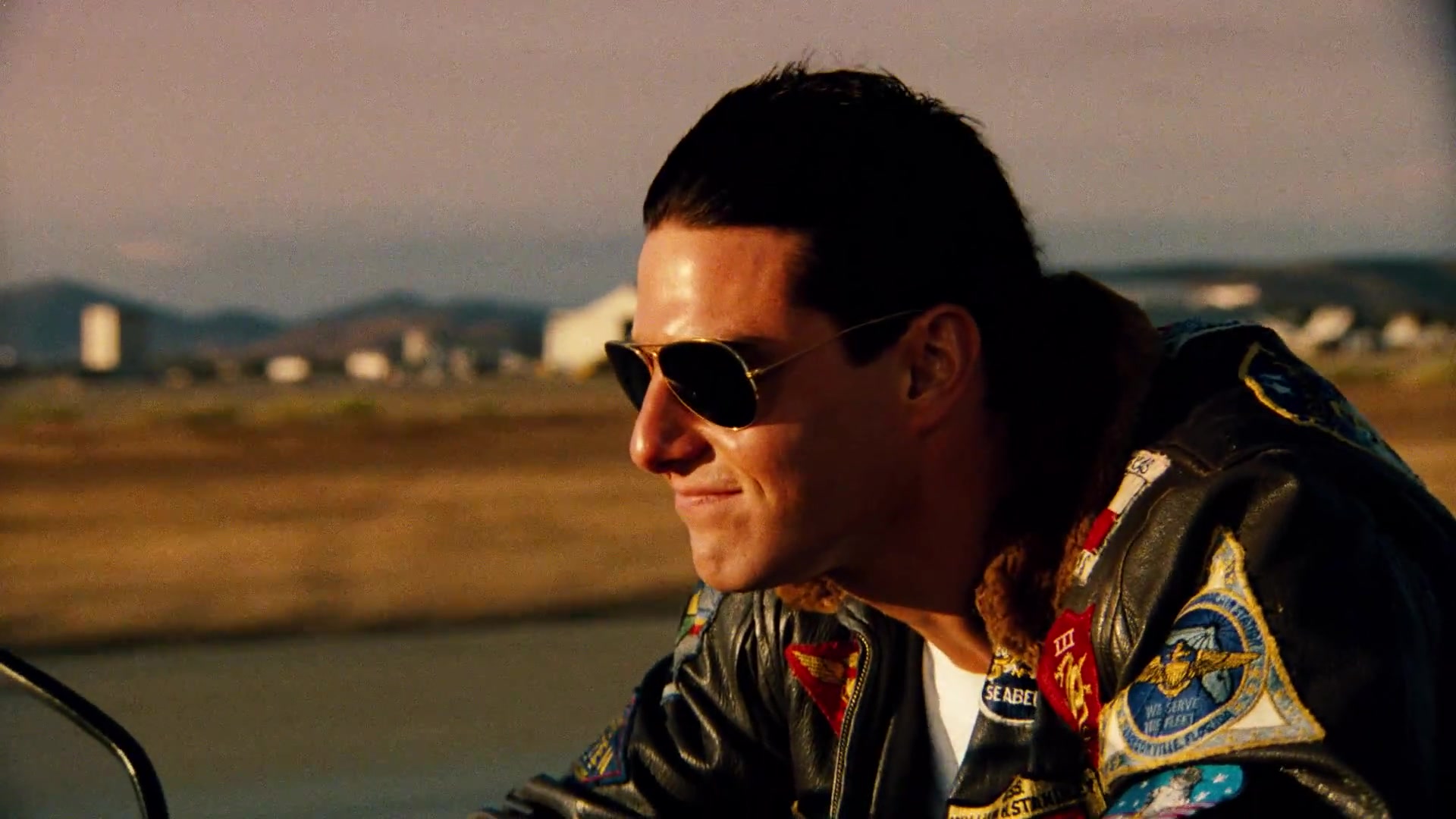 The leading man wears the A-2 Flight Jacket in Top Gun.

The flight jacket A-2 was made from horsehide only

The official color was "Seal Brown".With a very basic design, flight jacket A-2 saw action in each of the combat theaters of World War II. The pilots and crews saw their fellow A-2 as being more than just clothing. When a pilot finished basic training , was awarded an A-2 and this became a sort of trophy, something like the wings that made him officially that allowed pilot and move on to advanced training. After the jacket was decorated with patches that supported the training by what had happened, various merits achieved and the emblems of the squadrons to the pilot belonged. Also personalizing with hand paintings on the back, usually with the name, symbols and colors of the squadron in which integrated or plane that flew in the case of the bombers. The crew of the devices used to paint the same logo that had the plane on the nose, plus small pumps representing the number of missions accomplished. 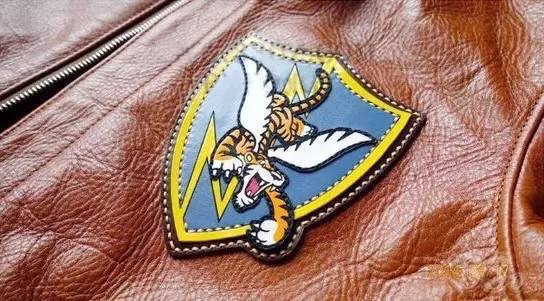 The logo of A-2 Flight Jacket

Today, an A-2 Original can fetch high prices on the collectors market and are considered military antiques.

A-2 Leather Flight Jacket manufactures in its most original form. It is available in horsehide, color "Seal Brown", very dark brown, back is one piece that will not break the seams, fleece elastic cuffs and waistband, central zip, flap type shirt with snaps Two pockets, side slits and that wearing uniform was frowned upon to go with hands in pockets, cotton inner lining and a label in the lining or neck indicating compliance with specifications. Such jackets were designed as very functional, almost like the top of a diver. The lining was very thin and had no internal pockets. External pockets side vents were not to put their hands. Many A-2, especially in its early days, were very narrow shoulders, bulging in the body and had shoulder flaps to place the gallon. Along with the wide pants "Chinese" original uniform, left the A-2 defined the classic look of a pilot. Another peculiarity is that the hides that were used were very hard, not like the leather used in street clothes, more tanned, thin and malleable. Many of these jackets, fresh from the factory, they are the kind of jacket to put her down, remains stiff vertical. The downside is that age much better and are very durable. You could even say that the type of general court, would not work with fine leather jacket that would be very awkward. 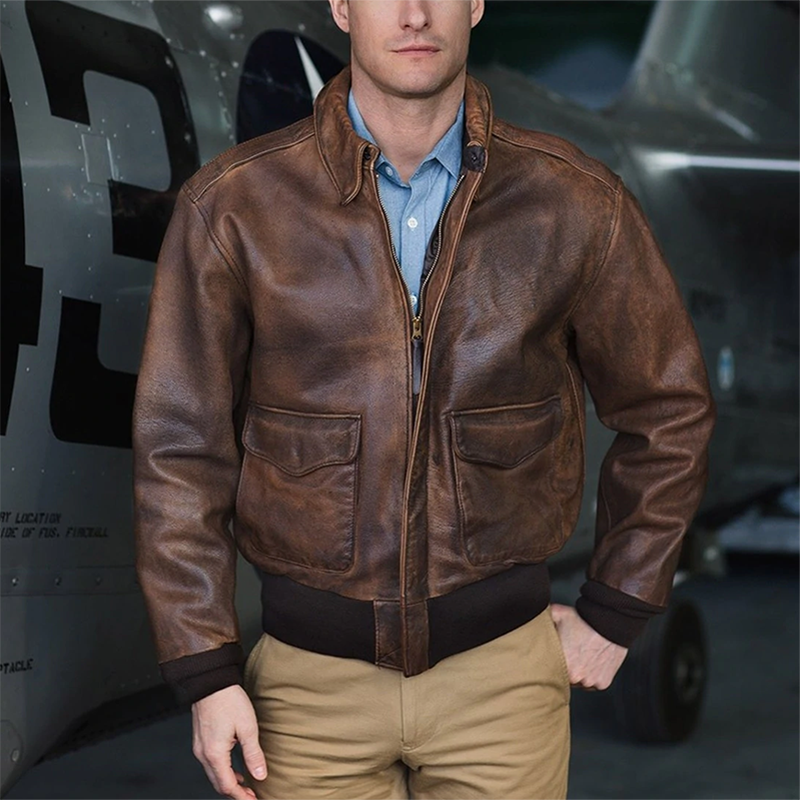 🛫The A-2 Flight Jacket in the Top Gun, get it from Near2Top.com

The skin is chrome tanned separately for each hunter. For most of the period in which the A-2 was originally produced tanned skins were used. Consequently, the appearance of a reproduction of this type of skin best represents the replica of the original appearance.

A-2 Leather Flight Jacket most authentic looking leather for this process which is very time consuming, but worth it. We are very pleased that our leathers reflect the most close to the specifications can be found in the originals.

🛒You can own your A-2 Flight Jackets from Near2Top.com 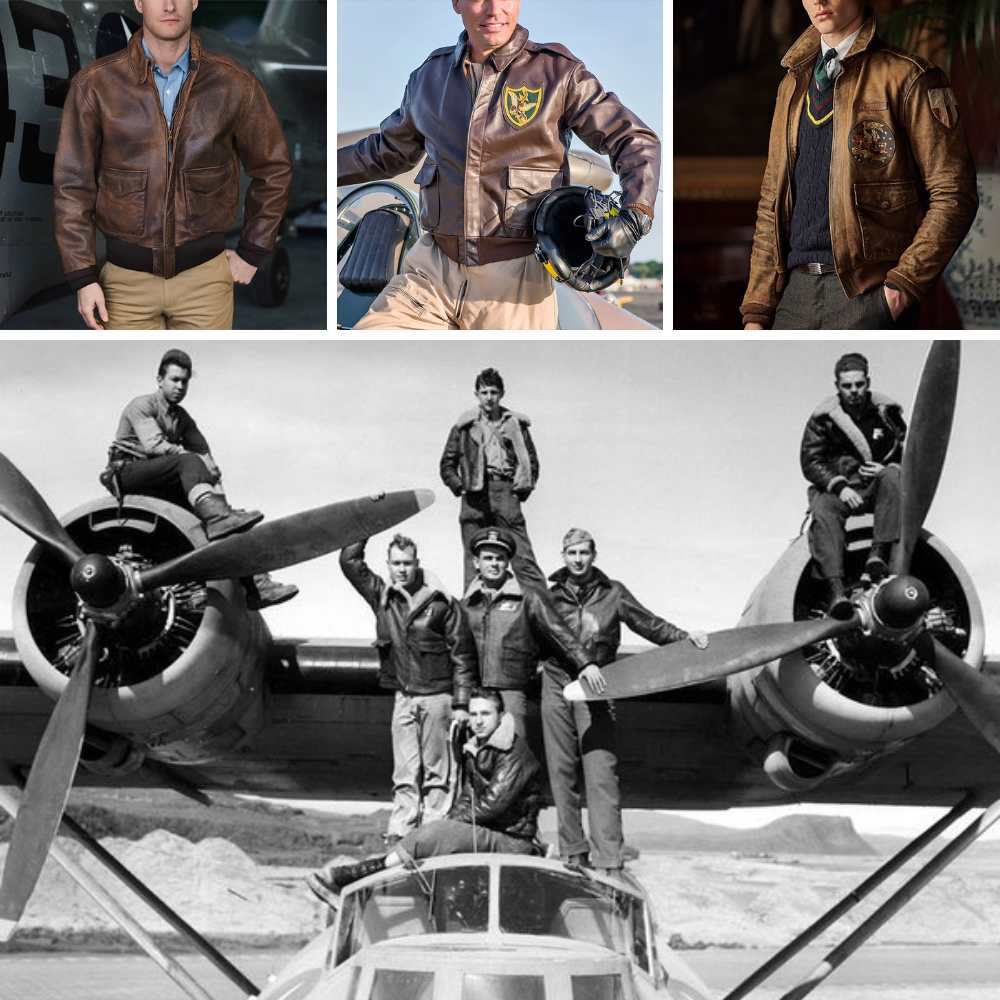 Why can I buy A2 jackets at low prices:
1. In order to give back to new and old customers, Near2Top offers huge discounts during Black Friday.
2. Our A2 jackets are sold directly online at the factory without any intermediate channels.
3. Due to Covid-19, there are a lot of A2 jackets and winter clothing, our offline physical store sales are blocked, so we sell them through online discounts.

4. This is not a long-term plan. After the inventory is cleared, all prices will not be sold at a discount.

Note: The delivery time will be affected by the epidemic, please understand.